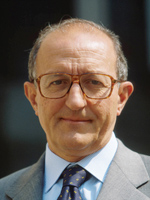 Has been member of various government expert commissions.

1996 – 1998 – councilor on economics for the Chairman of the Council of Ministers of Italy.

Member of Science-Technical committee under the Budget Ministry of Italy (1993 – 1997) and High council of he Central Statistical institute of Italy.