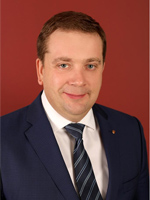 In 1996 began his career organizing conventions at the ‘Exhibitions-Seminars-Business’. Then he was appointed CEO of the company and became one of the founders of convention activities in Russia.  In 2006 Stuglev took over the company Restek Congress, the main contractor for the St. Petersburg International Economic Forum. Shortly he was appointed CEO of the SPIEF Foundation – the Forum’s operator. In the following years, the SPIEF became the largest event in Russia with participants including heads of state, top politicians, leaders of global business.

In 2015, the SPIEF Foundation was renamed Roscongress Foundation and became the operator of several major convention events.

In August 2017, he awarded the Medal of the Order ‘For Merit to the Fatherland’, second class for his contribution to preparation for and the holding of the 20th SPIEF.