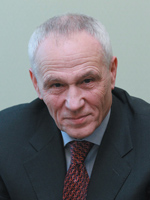 State secretary of the State Union of Russia and Belarus

1966 – graduated from Bauman Moscow State Technical University, qualification: mechanical engineer; later graduated from the Red Banner institute of the KGB of the USSR. From 1966 to 1990 worked in the 1st main Directorate of the KGB (foreign intelligence), from 1990 to 1994 — deputy head, head of department of the Directorate. 1994 – 1998 deputy director of the Foreign Intelligence Service of Russia, curated partnerships with foreign special services.

April – November 1998 — deputy secretary of the Security Council of Russia.

October 2007 – appointed Representative Plenipotentiary of the President of the Russian Federation in the South federal district, May 2008 — in the Volga federal district.

Since November 2011 – State secretary of the State Union of two countries, Belarus and Russia.