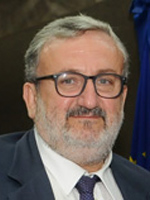 Mr. Emiliano now has a status of temporary non-practicing judicial officer; used to work as a deputy prosecutor at Baru District Anti-Mafia Directorate, and before that had practiced at the courts of Brindisi and Agrigento. He participated in the preparation of several landmark anti-mafia cases in Apulia. The major of Bari from 2004 till 2014, representing the center-left coalition.  Elected as the President of Apulia Region on May 31st, 2015.