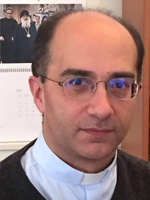 1992 – graduated from Bocconi university (Milan), specialization: economics of enterprises. Since 1993 member of the monastic order Society of Jesus. In 2005 – 2006 got license of moral theology in the Papal Gregorian university and qualification of professional journalist.

2005 – 2015 member of the board of writers La Civiltà Cattolica. Author of a number of articles on problems of international politics, economics, and international justice. Since September 2015 he has been living and working with the Jesuit community in Trieste where he is a religious leader. Since 2016 he has been director of the Veritas cultural center in Trieste.