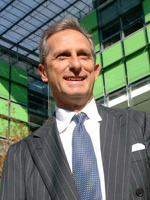 Chairperson of the Board of Directors, UBI Banca

Since July 2020, Gaetano Micciche has been Chairman of IMI, the corporate and investment banking division of Intesa Sanpaolo Group.

From October 2007 until March 2015, Gaetano was in the office of Director General of the Bank IMI which is now integrated into Intesa Sanpaolo Bank, and from April 2016 until July 2020, he was the President of the Bank.

Gaetano Micciche embarked upon his career in 1971 at the Central saving bank of the province of Sicily and rose to the Head of the Corporate Accounts Division.

In June 2002, Gaetano was employed with Banca Intesa. Currently, he is a member of the Board of Directors of RCS S.p.A., the Association of Banks of Italy (ABI), and the Scientific Committee of the Technical University of Milan. Giorgio Napolitano, President of Italy, awarded Gaetano Micciche an order for Distinguished Labor.