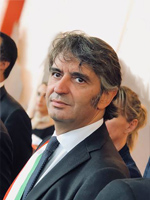 Major of the city of Verona

Born in 1971, graduated from the University in Trento with a Diploma in Law in 1997. As a professional lawyer he has always had a lot of interest for politics and started to engage in it in 1999 when he founded the Volare con i Valori (“To fly with values”) Association.

During the period from 2007 to 2012 he was a Member of the Municipal Council of the city of Verona responsible for the issues of environmental protection, sports and organization of leisure time.

In 2014 he founded Battiti per Verona Association (Fight for Verona), chairman of which he is and using which he implements his obligations to the city.

In 2017 Federico Sboarina was elected as the Mayor of the city of Verona having gained 58.11% of votes.