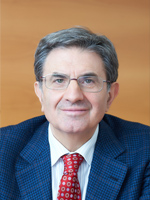 Bank Intesa, Chairman of the board of directors, Association “Conoscere Eurasia”, president

Since 1995 accredited by the Central Bank of the Russian Federation (Bank of Russia) as head of the Moscow Delegation of the Bank Intesa Sanpaolo.

Since 2003 – Chairman of the board of directors of the SC Bank Intesa, the Russian affiliate bank Intesa Sanpaolo.

Since 2012 – Chairman of the Supervisory Council of the first Russian-Italian foundation of direct investments MIR Capital founded by Intesa Sanpaolo and Gazprombank.

2008 – honorary doctor of economy of Plekhanov Russian Academy of Economics.

2007 – founds the Association “Conoscere Eurasia” in Verona, the public non-commercial organization, whose activity is aimed at developing and deepening cultural, social, and economic relations between Italia and Eurasian countries.

May 2008 – appointed Honorary Consul of the Russian Federation in Verona.

Since 2017 – member of the Russian Union of Writers.