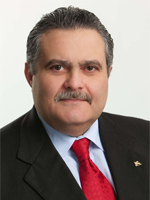 Luciano Cirinà has been CEO at Generali CEE Holding B.V. with organizational unit in Prague/Czech Republic since 2013. He is member of the Generali Group Management Committee from May 2016.

Mr. Cirinà began his career in 1989 with Deutscher Lloyd (Generali Group) in Munich as Underwriter and later as Chief-Underwriter with responsibility of the Industrial Fire Underwriting Department.

From 1996 to 2004 he served as Head of the Corporate Risks Division for Austria and CEE countries in Vienna and from 2005 to 2006 as Area Manager within the Head Office in Trieste with responsibility for Austria, Central and Eastern Europe, Greece, Tunisia and the Middle East.

In 2007 he was appointed CEO of Generali Versicherung AG in Austria and later moved to head up Generali Holding Vienna. In 2012 he was elected President of the Association of Austrian Insurance Companies.

In 2013 Mr. Cirinà moved to Prague becoming responsible for the Group‘s business in Central and Eastern Europe.