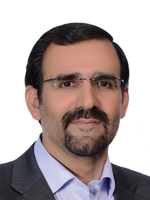 Graduated from the Tehran University with a degree in Law and Political Science.

In 2002–2004, Mr. Sanayi served as the Deputy Director of the Organization for Culture and Islamic Relations of Iran. In 2004–2005, he headed the regional cultural organization of the Economic Cooperation Organization. In 2004, he was appointed as the Director General of the Research Center of the IRAS for the Study of Russia, Central Asia, and the Caucasus.

In 2008, Mr. Sanayi was elected deputy of the eighth, and in 2012–2013, the ninth convocation of the Islamic Advisory Council; the Deputy Head of the Committee on Foreign Relations of the National Security and Foreign Policy Commission; the Head of the Parliamentary Group for Friendship with Russia and Ukraine; a representative of the Mejlis for the Caspian Sea.

Since 2013, he has been Ambassador Extraordinary and Plenipotentiary of the Islamic Republic of Iran to the Russian Federation.